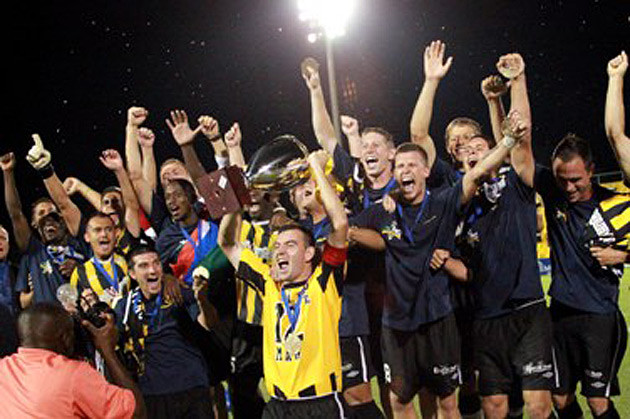 1:08 am on Sunday September 9, 2012
For the fourth time, Charleston Battery take the USL PRO title

The Charleston Battery kept their perfect record in championship games intact on Saturday night at Blackbaud Stadium, capturing the 2012 USL PRO Championship with a 1-0 win against the Wilmington Hammerheads.

Game MVP Jose Cuevas created the only goal the Battery would need to send the crowd of 4,963 home happy, threading a pass through the Wilmington defense in the 74th minute to Mike Azira, who hit a first-time left-footed shot into the far corner from the left side of the penalty area, giving Wilmington keeper Alex Horwath no chance.

It was the fourth title in four trips to the final for Charleston, which also captured championships in 1996, 2003 and 2010. The Battery entered the post-season as the No.3 seed, and took out No.6 Harrisburg and No.2 Rochester to advance to the title game. However, Battery Head Coach Mike Anhaeuser said it was a regular-season contest in Rochester on August 11 that put his squad on track for the title.

"In the beginning of the season after the first three or four games, I really felt like we had a team that could win it," Anhaeuser said. "We had a little hesitation or hiccup in the middle of the season, but when we won that game in Rochester 4-0, and I saw the guys play the way they did, I knew that we could beat anybody."

The No.5-seed Hammerheads, who reached the championship game after upsetting top-seeded Orlando City in the semifinals, fell just short of capturing their second title.

"I thought [Charleston] deserved to win," Wilmington Head Coach David Irving said. "The occasion may have gotten to us a little bit, but just to get here and the way we played the past few games is a credit to the boys. We just weren't ourselves tonight and we definitely didn't play the way I know we can play."

The teams spent most of the first half feeling each other out through hard tackles and physical play, as both felt the weight of the evening's proceedings. A steady rain and blustery wind hurt both teams' possession for much of the half, and Charleston midfielder Ryan Richter had the first good look at goal in the ninth minute, bending a left-footed shot from the top of box just wide of the far post.

It wasn't until the 40th minute that the first true scoring chance came courtesy of Cuevas – named USL PRO Rookie of the Year on Friday – who flicked a strong header toward the top left corner that was tipped over the bar by Horwath to keep the game scoreless at the half.

Wilmington brought on All-USL PRO Second Team midfielder Bryce Taylor to start the second half to try to boost its offense. It appeared to work as the Hammerheads began to press into the Charleston end more down the left wing, but the Battery soon went back on the attack. They came close once again in the 62nd minute, when Amadou Sanyang met Nicki Paterson's corner perfectly in the Wilmington penalty area, only to see his uncontested header trickle wide of the left post.

After Azira put Charleston into the lead, Wilmington pushed everyone forward and sent ball after ball in the Battery's penalty area, but the veteran defense led by John Wilson and Colin Falvey and backed up by 'keeper Andrew Dykstra, was able to hold tight.