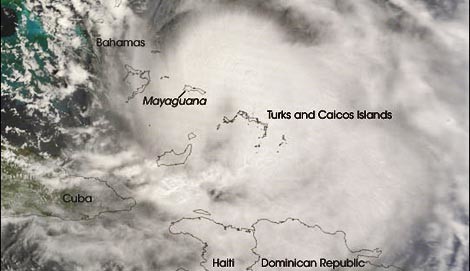 Image by NASAImage by 20080903hanna.jpg Hanna's delay and easterly movement near the Bahamas may contribute to the storm going north of Charleston.

Update September 4: The forecast has been updated, get the latest at our hurricane page.

Hanna is remaining a bit disorganized and has still not started moving our way and is drifting further east, meaning the storm may land north of Charleston, near the North-South Carolina border. The storm is also expected to have a later arrival of Friday night, instead of Friday afternoon.

Dr. Jeff Masters' WunderBlog has an excellent update, saying in part:
Hanna has been moving erratically over the past day, and has moved considerably farther east than most of the models expected. This decreases the threat to the western Bahama Islands, Florida, and Georgia, since Hanna will be starting further east when it makes its expected turn to the northwest. A landfall location near the South Carolina/North Carolina border is more likely, which would occur Friday night.

Locally, most governments are in wait-and-see mode as the storm's later arrival gives more time for any potential evacuation. The Post and Courier has a good roundup of what's going on in the area, saying in part:
So far Wednesday, it's been a better-than-average "day at the beach," at Folly Beach. Mayor Carl Beckmann Jr. said that while city officials are keeping eyes on the projected track of tropical storm Hanna, the city is functioning as usual.

Head over to the National Weather Service for more details, and stay tuned to our hurricane guide page for updates and what you should be doing.