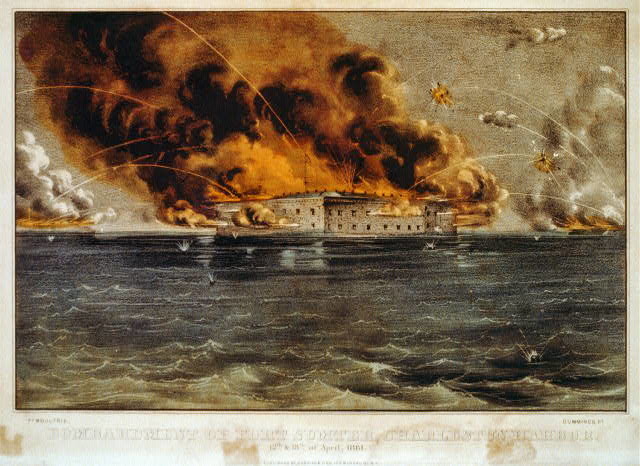 The Bombardment of Fort Sumter.

Update April 13: Here's an early-morning update with the better of the latest coverage.

Live 5 News has a quick but solid newsy video of the day and the observance of a day that split the country (watch that here.)

ABC News 4 has a pair of nice feature-y videos, one from the morning observance events at the Charleston Battery with re-enactors, musicians, and the like (watch that here), a second video goes out to Magnolia Plantation for a look at how the group is remembering and retelling the times and role of slavery in the country (watch that here).

The Post and Courier﻿ has a robust write-up with a smattering of video and photo items (get those here).

Update, midday: Well the morning session of remembrances and cannon fire has passed, leaving in its wake a smattering of early multimedia coverage.

The Post and Courier﻿ has an early written report (read that here) and a rather nice shot of some cannon fire (see that here), meanwhile Live 5 News has some raw video from the commemoration events and first shot from Fort Johnson ﻿on James Island (see that here.)

First reporting: All the build-up for the Civil War Sesquicentennial﻿ begins arriving today, April 12th, 2011 — it's 150 years since firing began on the Union-held Fort Sumter in Charleston Harbor.

I'm sure most of us know at least the vague outliers of this chunk of history, so I'll start off by saying this will be one of the noisiest days in Charleston since they finished blowing up the old Cooper River Bridges.

From all around the harbor, sites will fire on Fort Sumter for 45 minutes at both 6:45 a.m. and 7:45 p.m. with a multitude of other events and re-enactments spliced in.

The Post and Courier﻿ has the rundown on what you need to know; read it here.

And if your history knowledge is lacking, I'll point you to Wikipedia to get started.