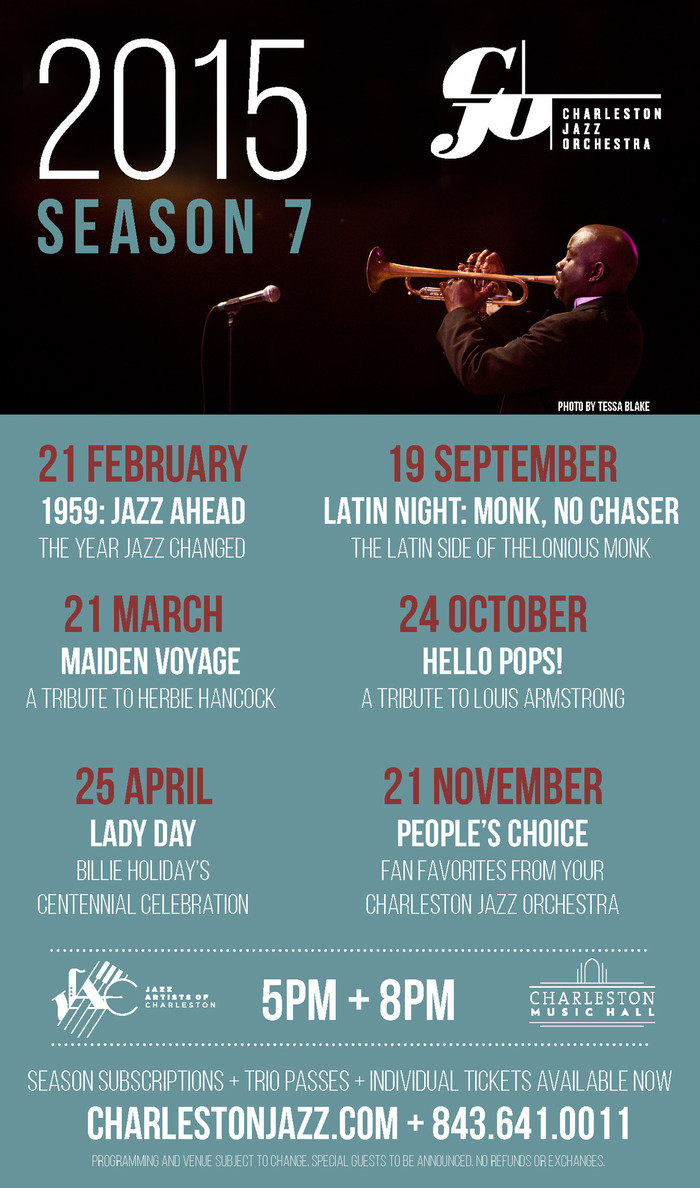 The Charleston Jazz Orchestra, Charleston's own resident big band, announces its upcoming Season 7. Performances will offer 2 sets per night, SET 1, 5PM and SET 2, 8PM. Each set is a separate, 90 minute ticketed event. No intermission. Season Subscriptions, Trio Passes and Adult, Senior and Student Individual Ticket Rates are available for each tiered section, $30-$45. All shows are performed at the band's House of Swing, the Charleston Music Hall, 37 John Street. Students qualify with a valid school i.d. Seniors must be 65+ years old. Children 18 and under - $10 with purchase of regular price ticket. Children 6 and under, FREE, with purchase of regular price ticket. Season Subscriptions save 10% OFF of Individual Ticket Prices and receive additonal benefits. Season Subscriptions, Trio Passes and Individual performacnce tickets available at www.charlestonjazz.com, by telephone 843.641.0011 and in person at the Charleston Jazz House, 93 Spring Street, Suite A, Monday through Friday, 10AM - 5PM. No refunds or exchanges.

Charleston Jazz Orchestra's Season 7 will offer something for all who love music. Armed with a roster stacked with some of the most talented musicians in South Carolina, the Charleston Jazz Orchestra, let by Music Director and Conductor, Charlton Singleton, is set to awe and inspire with an iconic season of programming. The new season will open February 21, as CJO presents 1959 JAZZ AHEAD: The Year Jazz Changed, followed by MAIDEN VOYAGE: A Tribute to Herbie Hancockon March 21, LADY DAY: Billie Holiday's Centennial Celebration on April 25, LATIN NIGHT: MONK, NO CHASER: The Latin Side of Thelonious Monk on September 19, HELLO POPS! A Tribute to Louis Armstrong on October 24, and new to this year, an additional season eprformance in November, PEOPLE'S CHOICE Fan Favorites From Your Charleston Jazz Orchestra on November 21. CJO's annual Holiday Swing performance will be announced as a separate special event at a later date. Season 7 featured guest artists will be announced throughout the season. Programming and venue subject to change.

The Charleston Jazz Orchestra is a twenty-piece big band made up of the finest musicians in the Charleston area. They all have extensive resumes and have played in a great variety of groups in Charleston and around the world. Charleston Jazz Orchestra is progressing in its seventh year of performances, and has established itself as Charleston's resident big band ensemble. The orchestra was debuted in March 2008 and, under the musical direction of bandleader Charlton Singleton, has been electrifying audiences ever since. CJO performs all forms of jazz, and its repertoire comprises of blues, swing, Afro-Cuban pop, progressive, Latin jazz standards, ballads, and sacred.

CJO is produced and presented by Jazz Artists of Charleston (JAC), a non-profit organization whose mission is to promote musical awareness and education, including the recofnition and preservation of the history of jazz, in the City of Charleston through performances, special events and educational outreach. The orchestra is an entertaining, educational and a stellar exemplar of the rich history and legacy of jazz in Charleston. Given Charleston's place in teh history of jazz, America's most original art form and its most significant cultural export over the last 100 years, the Charleston Jazz Orchestra represents the continuation of a musical tradition begun about a century and a half ago in coastal South Carolina.

Head to the source at jazzartistsofcharleston.org

You have provided the details here about the Charleston Jazz Orchestra SEASON 7 and it is very useful. You have also included the rules and regulations. The songs included in this show are very good. Thanks for sharing. optimum internet

I am really very happy to know about 2015 Charleston Jazz Orchestra SEASON 7. I have seen all the previous seasons and I was eagerly waiting for season 7.So very glad to know this. Thanks for sharing the details of it. Keep updating. wholesale tablets

Keep up the good work andplease tell me when can you publish more articles or where can I read more on the subject?top Virginia rhinoplasty surgeons

We developed a new workstation typology that could accommodate different function designs by establishing a series of new furnishings modules that enhance productivity. these island seatings

Your contents give me more creational ideas that I can possibly use on my web page too.whatsapp tracker